In the highly competitive niche of drone technology, new and ambitious players are constantly emerging. In the past few years, these aspiring startups have introduced a number of innovative technologies and concepts that ended up reshaping the entire industry and prompting established brands to rethink the way they approach the market. One such player is GTEN Innovation, a young driven company that is looking to disrupt the space with their flagship product; the Upair one drone which is definitely worth your attention and Upair One Drone Review.

The Upair one occupies a unique space in the drone market. It is one of the few affordable models that come equipped with a 4K camera. Moreover, it has a number of features and flight capabilities that make it worthy of the consideration of any aerial photography enthusiast. In this Upair one drone review, we will go over every single aspect of this drone in an attempt to find out if the hype is truly warranted.

If you are one of the people that give a lot of importance to the aesthetic aspect of drone, then the design of the Upair one is likely to appease you. It is remarkably sleek and exudes an undeniable high-tech vibe that accurately reflects the drone’s agility, power, and speed. The controller is another element that adds a touch of elegance to the overall package. The LCD display screen, in particular, stands out as one of the defining features of the design.

The 4K camera is this unit’s biggest selling point and the main thing that sets it apart from other models in its price range. The difference in resolution between regular HD cameras and 4K ones might not be that significant for regular users, but for a true photography enthusiast, the details and sharpness of 4K resolution are simply too valuable to pass on.

While the 4K camera is easily the highlight of the Upair one, the 2.7K version of the drone can still do the job just fine. It takes still image at a high resolution of 8MP and is equipped with a Sony CMOS sensor. Additionally, it has the same 120 wide angle lens as the 4K camera, so you are guaranteed to never miss any shot regardless of the position of the drone.

The controller of the Upair one is another component that we are not used to seeing at this price range. It features a 7-inch LCD display screen that provides the user with relevant flight data as well as a first-person view of the drone’s flight. For added convenience, GTEN Innovation has opted to build the software and the add-ons that operate the controller into the device rather than require the users to download them from the company’s website. More importantly, the remote controller is extremely easy to use and all the settings are intuitive and easy to grasp.

The Upair one drone does not solely rely on its high-quality camera to attract customers. In fact, it is equipped with a comprehensive set of features that are geared toward making flight and control as smooth as possible for the user.

The main feature that we are going to discuss is the return home function, a centerpiece of any high-end drone. Not only is it effective when it comes to ensuring the safety of your drone, but it can also serve as a power saving mode due to its minimal use of battery charge. The return home feature can be activated with a press of a button or when the battery charge is nearing exhaustion.

Features like return home are extremely beneficial for beginners. More often than not, inexperienced users will lose sight of their drone during a flight. Rather than panic and aimlessly search the skies, return home automatically sends the device back to the takeout point in an instantaneous manner.

The flight time is the first metric that a lot of drone enthusiasts want to know about, and for a good reason. It is after all the factor that determines how much fun you can have with your device. As far as the Upair one drone is concerned, the average flight time that you can expect is a little less than 20 minutes. This is significantly more than the 12-15 minute range that the vast majority of similarly-priced competitors provide. It is also worth mentioning that you can extend the flight time of your drone by getting more powerful batteries.

As the name suggests, flight range refers to the distance that a drone can operate within. This is mostly predicated on the frequency range of the transmitter and the sensitivity of the device’s receptors. The Upair one can operate in a range that reaches 1000 meters, which is above average relative to other entry-level/mid-range drones. 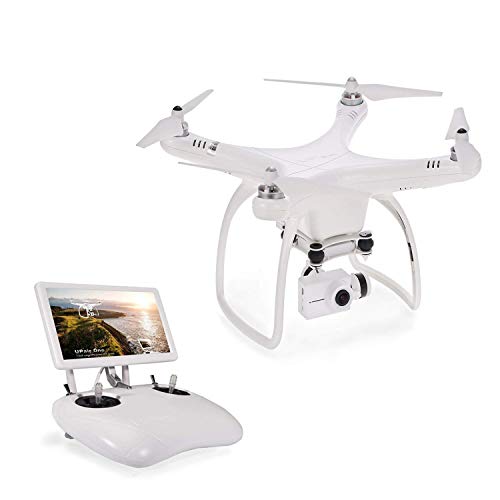 After carefully reviewing every aspect of this unit, we can confidently state that the Upair One Drone has managed to live up to the hype and expectations. Its affordable price, the multitude of flight features, sleek design, and the high-end camera should be enough reasons to prompt any aerial photography enthusiast to invest in it. If you want to look for more drones, you can read our popular article – best drones under 500